sequence to calculate gravity
Introduction
Calculating Gravity can be done in 5 steps.
Step 1)
Consider the interaction between a proton and electron like an hydrogen atom and calculate the amount of Coulomb (attraction) force between the proton and neutron
The Coulombforce in an atom like this represents the centripetal force ( force directed inwards to the center)

Step 3) First an explanation:
To expand the thought of mass as a quantum mechanical property, we look further into r. Heisenbergs uncertainty principle states that the distance of the electron is not always the same. Based on this principle we can assume that the position of the electron in relation to the proton is changeable.  This means that although the coulomb force is in equilibrium with the centripetal force, the distance ( or radius r) will change. But both forces will follow an different path.( The forces have an dynamic equilibrium) This path is described in the tab “Tie Graph”. Under the tab “Atom in a Gravity field” we see that the atom has a change in charge in opposite of the charge of the “gravity”  field strength. To achieve this reactive charge the relative position of the proton in relation to the electron cloud has to change. To explore the change of charge in the atom we use “Kepler’s Law of planetary motion” See tab “Kepler’s Law”
After introducing all this above we can calculate rmin , rmax , P and ε 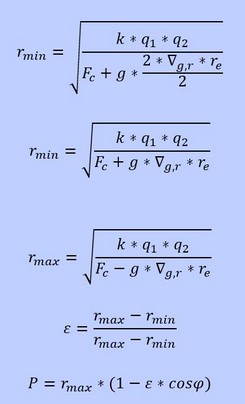 As a check, rmax and rmin can be seen as a vector, just like the calculated r(φ) in Kepler’s law.  This implicates that the difference between rmax and rmin is also a different energy level. Remarkable here is that this difference has the magnitude in energy level of a photon.
Step 4)
In this step we look to the radius function of the electron and the effects of  radius versus Coulomb force. Point of interest is the amount of change in Coulomb force into a direction(x).

Step 5)
Calculate the speed of the electron at different radii in relation to the nucleus. To do this, it is usefull to consider the impulse of the electron as a constant and therefore the Centrifugal force (Fcg) and impulse (P) can be calculated

Impulse is calculated as a product of speed times radius

At every change in radii of the electron in relation to its nucleus there is a new equilibrium between the Coulomb force and the centrifugal force. This means that for every probability value (P) the force in direction x can be constructed. This force produces acceleration in a gravity field which we experience as mass..

The original speed and radius of the electron is used as reference speed. Assuming that total impuls and thus frequency of the elektron are constant the speed at kepler’s value for P

And finally for all directions